The Ship That Was Missional Church Has Sunk 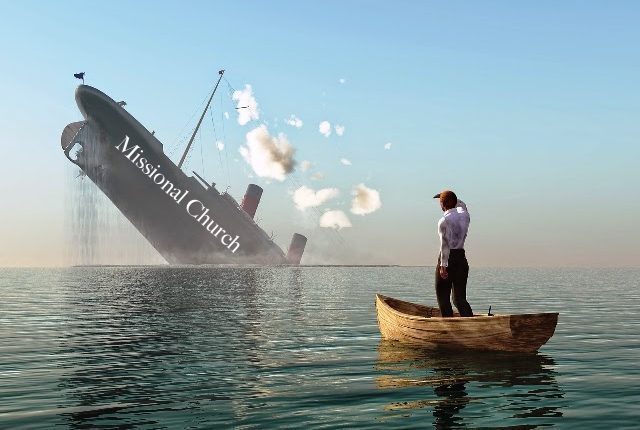 The success of missional communities depends on close physical proximity with others. It’s fundamentally about sharing life together. Physical distancing protocols make this impossible.

Churches must proceed now as many have for centuries: As disseminators of religious information—fountainheads of knowledge for deeper truths beyond the material realm. With technology as it is, the time has never been better to spread the message. Good news is good news whether or not it comes with a neighbourly hug and a freshly baked pie. Right?

Years ago, I became sick of the Church as an “information station.” To me, there had to be more to being a Christian than listening to sermons and participating in theological discussions. I was convinced that relationships had to extend beyond the weekly glad-handing of near strangers and the perfunctory “Hi Brother” and “God bless you sister” that happened during the Shake Hands and Greet One Another portion of the Sunday service.

So I launched myself entirely in the other direction. Sunday gatherings I said are only a small part of what it meant to be the Church. Churches I intoned, should be collections of people on mission in actual neighbourhoods. The high calling of the Church was to be present, available, and helpful. We existed to welcome people into the good news through tangible acts of love. I was sure another sermon was not what Christian people needed. Like any good hockey coach, I realized that more motivational speeches and drawing up plays on the whiteboard weren’t going to help us win the game. It was time to get out on the ice and play!

But now, thanks to the pandemic, all play is stopped. Even the weekly handshake is not a possibility. We have been reduced to online Church, and that is precisely the opposite of missional Church. How does one share life with someone on the other end of a screen? Sharing is no longer allowed. These prohibitions have turned some Christians into conspiracy theorists. They have become convinced that COVID 19 is some sort of anti-Christ scheme designed to destroy the Church. So they will plug their ears to the warnings, trust in the blood of Jesus to keep them safe, and pat themselves on the back as good martyrs when they experience negative push back from the broader culture.

These thoughts turn my mind back to the ancient times when Christianity received such high praise for helping those who were sick and dying from the plague during the late Roman period. While everyone was fleeing the cities trying to avoid the plague, Christians fearlessly went in to help. Bravely many died alongside the ones they ministered to. But I wonder if such bravery inadvertently prolonged the epidemic? Courageous Christians unwittingly becoming carriers of the dreaded black death. Given what we know now about the transmission of such viruses, it’s hard not to think otherwise.

I have little interest in online Church. I’m not going to join the resistance movement either and covertly bring my bean salad to clandestine potlucks where we secretly lay hands on one another to pray in defiance of the Devils morose schemes to ruin the Church. Missional Church, as I’ve known it is finished and what seems right, may, in fact, not be right as my historical reflections have led me to conclude. So what is my Christian life in the community of faith supposed to look like moving forward? I don’t really know. Perhaps that’s a good thing. Maybe it is in the space of humble uncertainty that the voice of divine guidance is most clearly heard. I sure hope so.