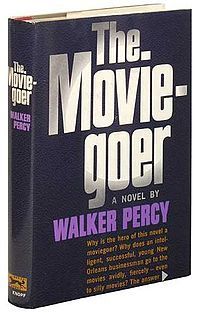 “…the specific character of despair is precisely this: it is unaware of being despair.” Kierkegaard, The Sickness Unto Death

Do you ever find yourself watching a movie in the theatre, and start to escape so much into the story that afterwards you leave feeling a little light-headed, almost as though your feet were hovering above ground? Wondering where it was you were just transported to, how it is you came back, and all without the slightest knowledge of your own participation in this subtle transcendence?

Maybe this experience is mine alone, but it is also the sentiment of Walker Percy’s narrator in his book The Moviegoer. Percy delivers a powerful novel of a young New Orleans man, Binx Bolling, who confronts the realities of his everydayness by embarking on a quest for authenticity that entangles his relationships and causes questionable bouts of chaos, all the while lifting the veil of consumerist ubiquity from the reader’s eyes through strong, fictional storytelling. Binx is a man who stumbles upon the realization that his own alienation in the world must be overcome by the search for salvation; to be saved by being onto something, as Percy so aptly writes, “To become aware of the possibility of the search is to be onto something. Not to be onto something is to be in despair.”

Throughout the novel we are taken on Binx’s journey in discovering the mysterious allusion toward what is ‘other’; to the tacit awareness of something beyond, above, and more than what is commonly known and sensed. This is part of what it means to be on the search for authenticity, as many existentialist philosophers of the modern age believed that only by immanent transcendence can we truly ‘be and become’ the very nature of our selves, since nothing bound by temporality can help us escape the temporal bound distractions of everyday existence. It is in this notion that Binx points out that the resignation to the banality of mass mindlessness in conventional amusements is the true sign of death as he writes, “Losing hope is not so bad. There’s something worse: losing hope and hiding it from yourself.”

It is argued that Percy, along with other writers such as Dostoevsky and Heidegger, denotes the perspective that man has two options to be saved from history as either through the passage of death or through the redemption of God, where both views offer the possibility of a renewed sense toward life and meaning. As an author, Percy often references the interpretation of philosopher Kierkegaard’s concept of being in despair, as the necessary precedent to being in faith. Binx struggles with “the malaise” when he realizes he is caught in the point of tension between the despair and the search. Binx begins to see how we are all consumers; consumers of scientific humanism in what it brings to us and us to the world; of imaginative creation through the movies; and of the novelty of sex, all to be cyclically re-consumed. He arrives at this point through movie-going, as a spectator to be affirmed in his existence and identity as someone, somewhere. The case is made that since we have stopped defining ourselves in light of God, the unseen Being who is irreducible to the will of man and by which we are to see all things, we are then left to the amusements around us in providing identification of who we are.

The overall story of The Moviegoer helps us question just how far we extend the scope of meaning, purpose, and identity into the world; the very same world we try to escape from as Binx does through the movies. Perhaps stories are more than just mere portals of deliverance, rather the very nature of storytelling is powerful enough to provide us with some form of truth; that something which corresponds to the reality of everything else. I tend to think along the lines of C.S. Lewis, that “I believe in Christianity as I believe that the sun has risen: not only because I see it, but because by it I see everything else.” We can choose what informs our being, and it is an important choice because it also informs our becoming. What are you believing? Who are you becoming? There’s a story. There’s a choice. You can resign to despair, fall to amusements, or as Binx Bolling discovers, continue on the search, because by being on it, you remain in hope for something more.

Death at the Manor: The First Four Why Do the Irish Have All The Luck? Maybe You Should Become a Mystic