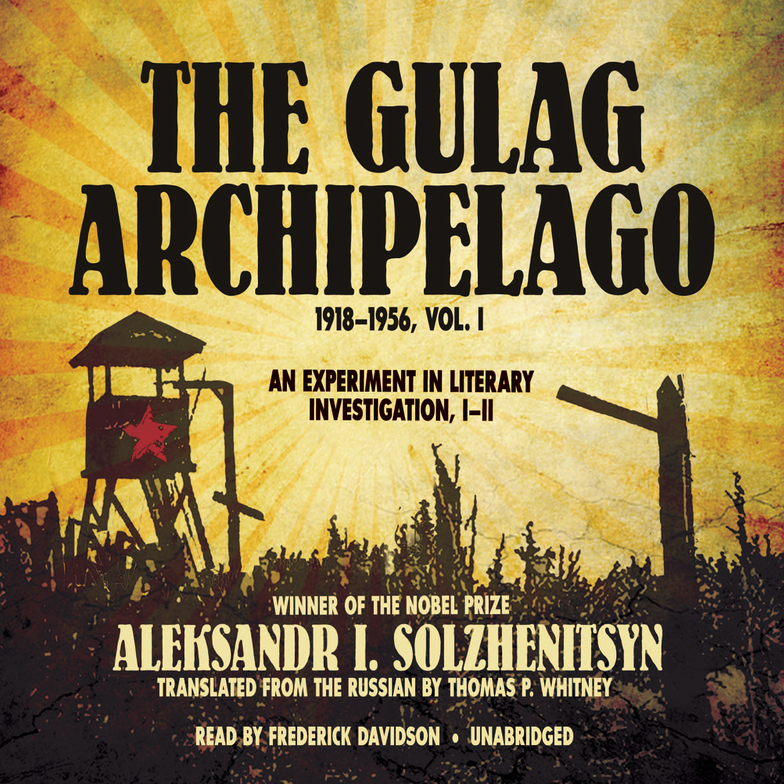 The Gulag Archipelago is an incredibly intimidating 3 volume set written by a wounded man on a mission to set the record straight. On its many, many, many, pages you will find a seemingly never-ending story of heartbreak, trauma, despair, and injustice. My review only covers volume 1 of Solzhenitsyn’s written war on communism. Seventeen years of the author's life were spent in the communist labour camp system known as the GULAG. He does his best to uncover what must surely be the worst story of human suffering in the history of humanity. How can it not be, when some 50 million people lost their lives? Experts say Solzhenitsyn’s book was the key that spelled the beginning of the end for communism.

Woman of Faith or Prostitute? — Solzhenitsyn says that Women were the more stubborn of the sexes to give up their faith, so waves and waves of them went to the GULAG. What was their crime? They were teaching the Christian faith to their children. Life in prison was not an unreasonable sentence for such wickedness. If you were convicted as a prostitute, however, the verdict was only three years, and you were freely able to ply your trade with the administrators. Returning home with suitcases full of payments after the time was up. As for the religious women, well, they were never heard from again.

Clap until you drop — The insane story of a communist party meeting in a small city where Stalin’s name was announced. The unyielding expectation for all in attendance was wildly enthusiastic clapping. As the clapping goes on and on, who would dare to stop? Finally after over an hour of clapping an exhausted official stops and sits down. He is arrested for anti-soviet sentiment and given ten years in the GULAG!

Russian Sailors, you better lie or else! A Russian ship ran aground on Swedish territory during the war. The Communist sailors sat out the war experiencing the freedom and plenty that neutral Sweden had to offer. At the end of the war, they went back to Russia, in private conversations with friends they admitted that Sweden was a better place to live than Russia. Their comments were discovered, and they were all given 10-year labour camp sentences for “Anti-Soviet Sentiment.” The Swedish press somehow heard about it, and they created an international news story, condemning the harsh prison sentences of the sailors. Russia denied that the sailors were in prison and set a date for foreign reporters to come and interview the sailors themselves.

Meanwhile, they pulled the sailors from the prison camps, fattened them up, and coached the crew to tell the foreign reporters that they were free, happy, well travelled, and well fed. They must communicate that the USSR was the best country in the world to live. Naturally, if they didn’t comply they would all be killed. The sailors lied to live; the Western world was convinced, the reporters issued an apology and left the Soviet Union. Whereupon the sailors were immediately sent back to their prison camps!

Easy ways to get a prison sentence

Confess — Confessions were all that mattered in this justice system. Whatever means necessary to obtain a conviction was fine. Evidence was not required. The powers that be didn’t hide this either. The philosophy that underpinned this wretched system was the conviction that absolute truth was unknowable anyway.

I’ll take the Gestapo over the KGB — Could anyone be worse than the Gestapo? Solzhenitsyn says yes, at least they were remotely interested in the truth; the Russian secret police were just interested in quotas. He shares the story of a Polish guy who was interrogated by the Gestapo on suspicion of being Anti-Nazi when they could find no evidence they let him go. When the Russians came, he was arrested on suspicion of being Anti-Soviet. There was only torture and a long train ride to the GULAG, they didn’t care about the truth.

Russia the worst country ever to fight for under the Communists

Thanks a lot, England! — Hundreds of thousands of Anti-Soviet partisans were ready to fight to the death against Stalin at the conclusion of WW 2. England negotiated a bunch of post-war deals with the Communist dictator, the most damning of which was the agreement to help disarm anti-soviet forces. The English used their anti-soviet reputation to lure all the partisan leaders into a special secret meeting. After the English managed to get all the various leaders together in one city, they turned them over to the Soviets. With all the leaders in Soviet hands, the battle was over before it started. The Soviets purged out of existence anyone even remotely connected to these partisans. The body count for this English betrayal was exceedingly high. Solzhenitsyn, understandably, had no great affection for Churchill.

Blame the Church  —  It’s 1920 and Russia is starving. Fieldworkers have been off fighting wars, and they have little incentive to work the fields upon return because the government takes everything anyway. The Communists tell the church to feed the poor, isn’t that the churches “job” after all? The church agrees to sell off all its /Icons/gold etc. to stop the famine. The Soviets tell the church to give them the money, and they will make sure the people get fed with it. The Church hesitates, they will feed the poor, but they don’t trust the government, they want to run the program themselves. The Soviets seize upon the hesitation as an opportunity to slander the church. A vicious defamation campaign ensues, and all the church leaders are arrested and slaughtered for their “lack of compassion” upon the poor starving peasants. Lies, terror, and violence is the M.O. of communism.

It’s easy to see why someone like Jordan Peterson after spending so much time studying Solzhenitsyn and the great failed experiment of communist Russia puts such a premium on telling the truth. Truth can only flourish where free speech is permitted. For Peterson, the price is just too high anytime the truth gets bent or it’s pursuit prevented, even if the reasons are for “the greater social good”  After reading this book, it is impossible for me not to agree.