The Enlightenments Effect on Religion -- Good or Bad? 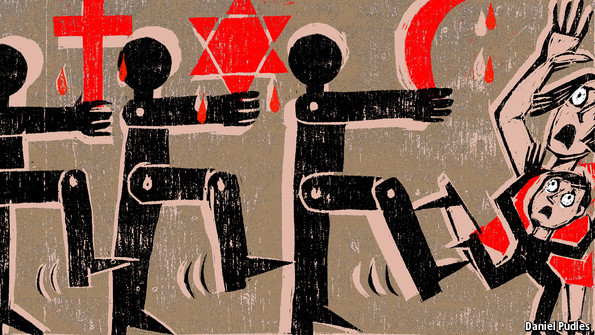 They agreed that anyone who refused to seek the  Lord, the God of Israel, would be put to death—whether young or old male or female -- 2 Chron 15:13

Then when the Sacred months have passed, kill the Mushrikun (Idol worshipers including trinitarian Christians)  wherever you find them, capture them and besiege them and prepare for them each and every ambush. -- Surah At-Tauba 9:5

With the exception of Jesus' counter cultural words in Matthew 5, the two passages from the Bible and the Quran above are perfect examples of what religion was capable of prior to the Enlightenment.

As crashing waves slowly erode a shore line, the enlightenments steady pounding of "question everything, believe nothing, human reason above all" began to fracture the steady shorelines of Europe. Nothing could stop this tide. The mantra of "human reason first of all" created healthy (and unhealthy) scepticism which eroded irreversibly so much of what was involuntarily accepted as true in that day, no place was left untouched by this rising tide, most especially religion. The firm shorelines of religion in Europe began to crumble for some very understandable reasons:

There had been a couple hundred years of religious war between Catholics and Protestants which had ended in stailmate with all sides exhausted, and beginning to think "there has to be a better way". In addition the development of dozens and dozens of denominations since the reformation was enough to cause even the most religious of people that niggling feeling in the back of their mind that the right path to God might be little more than a best guess.  Then it happened, science slipped passed theology in the race for supremacy. God no longer informed us about science. Science informed us about God. Eventually, sufficient amounts of doubt took the fight out of religious zealots. Was there really a need to clobber someone over the head just because they didn't believe as you did? The answer was becoming increasingly clear: No.

If one wished to journey towards God that trip would have to be a voluntary trip  based on all sorts of information, evidence, tradition and experience. Before the enlightenment, the idea of voluntary religion was unthinkable. Theology was at the heart of knowing. Ones understanding of God was all that mattered everything else in life was just details. People were born into certain systems of belief and these systems were true and unquestioned. To wander from the truth for any reason was dangerous to the community and damning for the soul. Thus responsible leaders both political, military and religious embraced their duty to stamp out heresy and false belief. The eternal destiny of their people mandated aggressive action. The assumption of meta-physical truth being known conclusively is what the enlightenment destroyed.

Many parts of Islam have not yet gone through any sort of enlightenment. Unlike Western religions, Islam is not a voluntary belief system yet, that means it's adherents  are not free to determine the legitimacy or illegitimacy of their faith. For many Muslim systems, the Quran (and Hadith in some cases) is still the diffinitive truth that must be believed at all costs. Life both now and forever depend on it. Any threat to this belief must be destroyed.

Granted, it's disconcerting for a faith position to be relegated to optional. Jesus for example, claimed that he was "the truth" such definitive statements don't leave a whole lot of options on the table.  How must a doubt soaked post enlightenment Christian come to grips with this claim? How must he share this claim with others?

Let healthy doubt create humility. What would be wrong with saying "Jesus might be the truth, and this is why I think he is"? Nothing in my estimation. We will never go back to involuntary religion, so the verbal bluster that comes from that era should be dropped. I also think we should take seriously, the words that Jesus gave us about loving those who oppose us. In the post enlightenment scientifically based world it will be impossible to know with clinical certainty existential truth based on ancient historical narrative, therefore we simply can't have an arrogant swagger when it comes to presenting what we believe to be true. Faith is the confidence we have in what we cannot see, but our senses will more easily grasp what cannot be seen, if everything we do is wrapped in love.  This is good advice for all the religions of the world.

This less dogmatic, more unsure stance will be completely unpalatable for some strong believers who have managed to avoid the doubt that comes with the enlightenment. For me, letting go of some certainty regarding my faith is a tremendous step forward in developing a world of peaceful coexistence, and even peaceful cooperation. Easing up on personal certitude in order to embrace the free will that comes with voluntary religion is infinitely better than the shallow benefits of confidence, conformity, and security that come with involuntary religion.