The Claws of the Panda 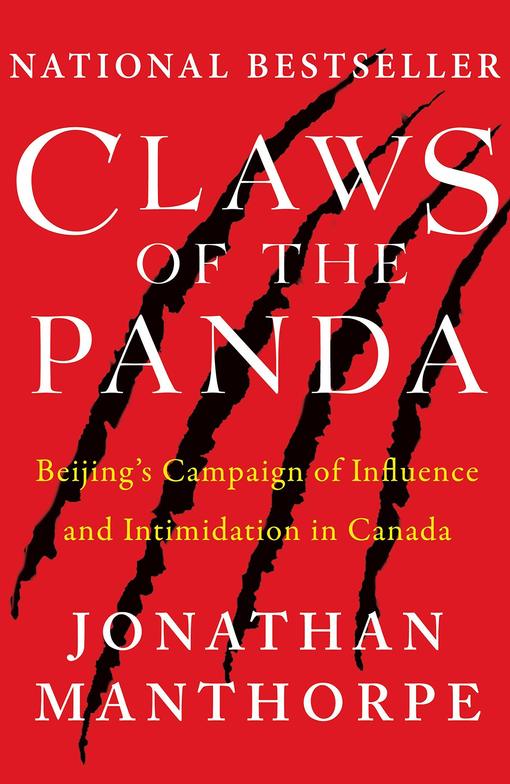 Jonathan Manthorpe is not mincing words or trying to be diplomatic with his book. Essentially he is saying that Canada is a puppet state of China. The country of maple syrup, hockey, and politeness is so thoroughly infiltrated and dominated by China that we as Canadians should hardly consider ourselves autonomous any longer. Manthorpe's frustration is not directed at the Chinese for their intrusion, however. It's what emerging world powers are going to do. He is more perturbed with the decision-makers and politicians of Canada whose bumbling stupidity allowed this to happen.

"Canadian Christians were spurred by not only the zeal of Christian evangelism but also the notion of the Gospel as a charter for social change. That belief, that Canada could change China by the self-evident appeal of Canadian values…is delusional…Canada is never going to change China, neither by example nor by compelling arguments…Many Chinese benefited from the training provided by Canadians in hospitals and universities in China, but the majority in later years were no longer practicing Christians…”

Is he correct in his dismal analysis of evangelical mission work? What about all the reports that the fastest-growing Christian church in the world is the Chinese house church? Do Christians measure success by conversion rates or faithfulness? Manthorpe is understandably upset, as you will also be if you read this book, but where does such a negative view of mission work factor into the overall thesis of his book? The answer: A significant number of Canadian missionaries sided with the Communists in the complex civil war that China experienced after W.W. 2. China would then go on to use these sympathetic Canadian Christians as pawns in their efforts to expand their worldview and global influence. This book pulls the curtain back on how the Chinese Communist Party has been riding roughshod over Canadian values and interfering in Canadian internal affairs. Still, the original foot in the door was through these missionaries.

Canada a safe haven for Chinese criminals — The Chinese people have never been able to trust their own government, especially when it comes to money. Canada created the equivalent to a modern "head tax" for wealthy Chinese people to invest in Canada. The equivalent of the Chinese mafia pounced on this opportunity to protect their investments, and strengthen their corrupt influences. Canada was asleep at the wheel, they turned a blind eye while dirty money and corruption of the Chinese variety took hold in Canada. According to the author, atrocious policies by the Canadian government are the reason why Canada has significant challenges in the real estate, education, government and business sectors. Manthorpe provided far too many examples to leave anyone feeling good about the situation. Especially if you live in Vancouver!

If you are Chinese, you belong to China, even if you live in Canada. The author says that the CCP is intent on maintaining an espionage network in Canada that uses the Chinese diaspora. (nearing 2 million people) A Chinese person is, first of all, Chinese. Deep down, the CCP expects Chinese loyalty and calls upon it when necessary. Chinese dissidents are regularly intimidated in Canada, and non-dissidents are regularly engaged to spy and report back to the CCP. The threat to relatives "back home" is always the strongest motivator to mobilize espionage, that and shame.

China's values are opposite to Canada's, and that's the problem — The CCP does not value freedom of expression or respect for political dissent. "Truth" to the CCP is not an object to strive for; the truth is merely a propaganda tool. If it suits the parties' interests, then it is presented, if not, then it is cast aside. Canada is built on the supremacy of the rule of law, This value is categorically rejected in the CCP system. Freedom, truth, and the rule of law are sacrificed when the Panda comes to play. Canadian leadership for the last 50 years has swung the door wide for these corrupting influences to come into our society.

China's Return to Greatness — For 200 years, China has been dominated by the West. Subjugation does not suit a proud people group with 5,000 years of rich history and expansive empire-building in its rearview mirror. This time in history, according to Chinese patriots, is "the great rejuvenation of the Chinese people." The tectonic plates of global power are shifting, but this for the Chinese is nothing new; it is merely a re-emerging of the world's "natural, irreplaceable, superpower." A new version of China's middle kingdom has finally arrived, and everyone else in the world should know their place.

Democracy is not the better path — President Xi has made it clear that he has no regard for the values of democracy and human rights that have been at the heart of the international liberal order since the end of the Second World War. He is an evangelist among developing countries for China's model of economic advances achieved by a secure one-party state managing a close-knit family of oligarchs and state-owned enterprises. His model is catching on, especially in developing countries where Chinese investment dollars are pouring in.

This book is depressing to read. Does Manthorpe have his finger on the truth? It seems like it. The numerous examples he gives are both riveting and disturbing. Also, my own personal experience resonates with his findings. Especially having lived in and been evicted from a high-rise on Robson street that was built and sold exclusively to Chinese clients a world away, many of whom, have never even seen their investments, and are quite content to have them sit empty, while locals like me must endure the significant challenges of Vancouver's housing crisis. I know enough to realize that something is not right with this picture.

So Chinese influences are super strong in Canada what now? Manthorpe encourages more robust policies and a hands-on approach when working with China. He is not suggesting the expulsion of Chinese people from Canada, or to shut down relations with this burgeoning world power, but only to become more pro-active about them. The "sure, do whatever you want, just so long as you pay us money" approach has to stop, and that's what this book is screaming about.