The Atheist Who Didn't Exist 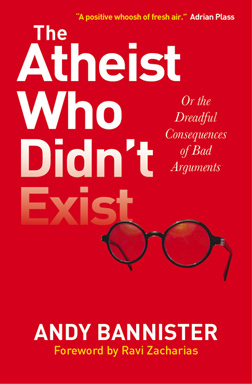 What’s this book about?

Andy Bannister attempts to use good natured humour to point out the logical fallacies and poor reasoning of modern atheist superstars like Richard Dawkins and the late Christopher Hitchens. In a way as I read this book I felt a striking parallel to the Donald Trump political saga that we are enduring.  The popular atheists of our day are functioning like the Donald Trumps of philosophy. Man handling, bullying, and belittling anyone who might disagree with the obvious conclusion that matter is all there is, and the the idea of God is on par with the idea Santa Claus. But like the political Trump, when searching for content amidst all the bluster, you find that there is not much there to back up these supremely confident conclusions.

Atheism is actually a belief system like all the rest. It doesn’t work to say “Our belief is not a belief” Not all God’s are the same, Atheists can’t simply dismiss all by “saying same crap different pile”. Religion doesn’t poison everything. When Dawkins suggested that he thought getting a Catholic education is actually worse than sexual abuse, I wonder if he would be willing to put that assertion to the test with his own daughter, not likely. Science can’t explain everything. Scientism is a dead end street that kills ones ability to reason. In all Bannister looks at 11 really bad arguments put forth by atheists to debunk God.

How does he do? Pretty well I think, but of course I am a Christian. What I appreciated about the book was it’s decidedly jolly tone, too many of these types of books just read angry. We need less angry.

What did I learn?

Is evil a greater problem for theism or atheism? If I’m a theist than I have to ask the question why does God allow evil? It is a question thats tough to answer.  Of course if I am an atheist, I have to ask myself an equally difficult question. Why do I even care about evil in the first place? There is no such thing as evil if the material world is all there is, but yet evil feels real and it bugs us all. Where does the presence of evil point? To something beyond the material world I think.

Without God how to we determine what is good? pragmatism? government? majority rule? whatever gives us pleasure? All of these answers create huge cracks in which people fall and suffer. How do we value human life? Is our value based on our body parts, our ability to produce, our popularity? Science I suppose can tease out answers like this. But they all lead humanity into dark places. Goodness, value, meaning purpose all are answered on the strength of faith alone, science is a tool, and on the big questions of life it’s the wrong tool to use! If we try to squeeze ethics from science we all lose. We cannot live by facts alone!

Truth seems to matter to everyone, but if atheism is true, why should it matter then what someone believes? Why is Dawkins so irate that people might be embracing a comfortable lie instead of a hard truth? In the whole scheme of things if we are just matter dancing to our DNA, why should Dawkins care a lick about truth, it amounts to nothing anyway? His shouting is a subtle tipping of the hat to God the giver of truth.