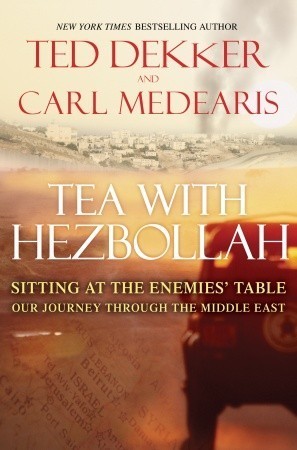 This book comes to us because two Christian friends decided to go to the Middle East in a daring and dangerous bid to find enemies of America, sit down to tea with them, and get their thoughts on Jesus’ controversial teaching to love one’s enemies. The book is not a clever apologetic for Christianity or some technique to make the faith that comes from Jesus look better. It’s an honest search for truth. I had a hard time putting this book down because these boys at places seemed to be in real danger and their topic over tea time with terrorists was indeed something I wanted to listen in on.

No one is good at loving their enemy.

“I don’t know what I should believe with respect to governments’ use of power. But one on one, love is the only solution, and nobody does it well. Not Christians, not Muslims, not Jews” — Carl Medearis

Christian Included  I learned that the first suicide bomber was a Christian, I learned all about the Shatila massacre of 1982, In which a Christian group from Lebanon invaded a Palestinian refugee camp and slaughtered over 3000 innocents in revenge for the assassination of the then Christian president of Lebanon. It turns out the real perpetrators of the president’s murder were another Christian group from Syria. I also learned about one of the great tragic ironies of history. The Samaritans whom Jesus uses to communicate his great message of love for all were almost entirely exterminated by Byzantine Christians in the 6th century.  The Spiritual progeny of Jesus destroyed the very people upon whom Jesus built his “love your enemy” teaching. Well, that’s encouraging. Over Tea, these enemies of America didn’t even have to bring up the crusades, they had plenty of more current events to point to regarding Christianity’s failure to love the enemy.

There is always an exception to this rule. Every Muslim interviewed agreed in principle that Jesus’ teaching was more or less useful, but also that there are explicit and necessary exceptions to this rule.

Once Mohammed extended love to a Jewish neighbour who regularly showed disdain for him by dumping her garbage on his steps, when asked if this Muslim folktale could be used to support Jesus’ teaching to love your enemy among the followers of Islam, the Hamas leader being interviewed flatly said: “dumping garbage is one thing, killing people is another!” I will not turn my cheek, I will fight!” and so it is, and so it will always be it seems.

A light in the darkness So was Jesus’ teaching a complete fail? Seems like it, however, there was one interview that was different than all the rest.  His name is Sami Awad. He is a Palestinian Christian from Bethlehem who has been persecuted for decades by Israelis. He is regularly the object of false accusation. His property has been taken from him; he’s been arrested, shot at, and had family members deported. He has been humiliated at checkpoints and has received death threats. He has no freedom of movement, and his neighbourhood disappears from behind by high partition walls. But Sami as a Christian person believes in loving his enemies, but how? His enemies are terrible! He says the critical part of loving one’s enemies is to understand their suffering. So for him to do that,  he took a trip to Auschwitz, spent the night in what was an open grave on the grounds. Sami, found himself weeping through the night for the sufferings of Jews in the Holocaust. When he came back he knew we would continue with his non-violent protests, always resisting the gradual takeover of his land peacefully, but he understood more than ever Jewish pain, and somehow that made him not hate them. Sami was quick to say that It’s a dangerous thing to speak about peace when everyone around you wants violence. Or to talk about love when there is so much hate. I suspect that someone will probably kill him at some point. But does that make him wrong or misguided? I say no.

If Jerusalem is a showcase for faith, it is also a clear picture of the utter failure of organized religion to bring peace and harmony to those it purports to love. Faith may have exalted Jerusalem, but religious fanaticism has decimated it time and time again. If God had ample cause to banish Adam and Eve from Eden how much more does he have for banishing religion for his city!

Jesus gazed out over this land and said, love God and love the heretic next to you. He died for that truth.

Is it belief or behaviour that matters most?

If violence is always justified in the name of defence than violence will never stop. Only Jesus’ teaching can break that cycle. I noticed that in addition to Sami there was also a Saudi and a Druze who seemed to be loving their enemies as well.  Are these guys Jesus followers without knowing it? Does belief come down to behaviour? Is it true that it’s not so much what one believes about theology, historical data, or doctrine instead what one does? If faith in Jesus is not actualized through sacrificial love for even my enemies can it even be called Christian faith? I have my doubts. But if this is true, I also have my worries, because I know that many times in my own heart, I do not wish a blessing on my enemies at all. Does that make the Druze and the Saudi more of a Jesus follower than me, even though my theological view of Jesus would be much higher than theirs?

The book is not tied up nicely with a bow at the end, loving one’s enemies seems an impossible task and Christians just like everyone else are generally terrible at it. Moreover, many of those interviewed said, it’s not even right to try to love one's enemies. Sometimes justice is more important than love said almost everyone who sat down to tea. Are they right? The book leaves us with much room for thought. In the end, I have to side with Sami, his way might get him killed but it’s the best way, I think.

To heal someone, you must meet them where they are. This was what the Good Samaritan did. We serve them by understanding them and speaking to them in love, not by shooting at them.  — Sami Awad.