Scripture and the Authority of God (Book Review) 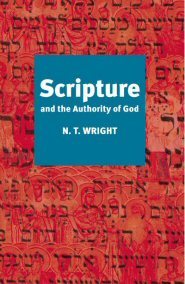 N.T. Wright is trying to answer three questions, let’s see how he does.

In what sense is the Bible authoritative?

It means God’s the boss. Biblical Authority is shorthand for the God’s authority somehow exercised through Scripture.  Wright does not want us to think that God’s word is a synonym for the written Scriptures (27) It’s not, It’s much bigger than that. The written word is the expression and embodying of the living word. John didn’t proclaim that the word was written down, he proclaimed the the Word took on flesh and dwelt among us.  When the Apostles refused to wait on tables because they wanted to give themselves to the Word of God and prayer, its wasn’t extra time in the Torah scrolls that they were angling for. It was the story of Jesus, particularly his death and resurrection, as the climax of God’s grand story that they needed to focus in on and preach about. Jesus as the fulfillment of all that had gone before could now be teased out of the Torah scrolls with greater clarity if they had opportunity to read them, but make no mistake the Word they were after was the knowledge of Jesus wrapped up in God’s grand story. Wright uses the word “story” 83 times to help us understand that the authority for the Christian is God’s grand story, climaxing in Jesus — this story is the “word of God” which by divine providence came to be expressed in written form through the work of the early writers and compilers.  The Bible is the charter which forms the basis for the fulfilled telling of the story of God at work among his people.

How does one understand and interpret the Bible?

Totally contextual, multilayered, critical realist approach. Everyone got that? We good to move on? I suppose an explanation is in order. First however, Wright takes us on a world wind tour of the history of Biblical interpretation. It’s always good to know where one is coming from!

Marcion made the Scripture into two totally different stories with two altogether different God’s, he tried to “de-jew” the Christian story, and debunk the Jewish one. Allegorical interpretation was a dramatic counterbalance to Marcion’s throw out the bad stuff mentality.  Basically everything in Scripture became a mystical representation of Jesus with absolutely no care for the context. This was a wayward albeit sincere attempt to stick with Scripture, even when Scripture was problematic. (particularly O.T. Scripture) because of it’s lack of control. Once you can make scripture stand on its hind legs and dance a jig, it becomes a tame pet rather than a roaring lion. (51)

The reformers, bucked against the nauseating allegorical interpretations of their predecessors, but their emphasis on grace over law inadvertently set the story improperly against itself at times. The following generations of reformers played around with various interpretive strategies in which they would make distinctions to help with interpretation, for example, Jewish moral law was seen as distinct from Jewish ceremonial law, making the moral applicable and the ceremonial not applicable. Wright gives this the thumbs down, citing that ancient Jews would have made no such distinction. He dismisses dispensationalism as a fanciful notion, and leaves it at that.

Totally contextual means that the cultural context of a Scripture must be considered at all times. Multilayered means that Scripture is like a five act play with each act stacked up on top of the other, with the whole communicating one grand story. The implication is that some Scriptures will mean something in there original context but will also mean something more in the broader context of the story as a whole. It also means that some portions of Scripture will be less important. To quote Wright:

As mentioned earlier Wright acknowledges that some parts of the Scriptures are no longer relevant for the ongoing life of the church —not, because those parts are bad, or not God-given, or less inspired, but because they belong with earlier parts of the story which have reached there climax. (39) He captures the idea well with the following illustration:

When travellers sail across a vast ocean and finally arrive on the distant shore, they leave the ship behind and continue over land, not because the ship was no good, or because their voyage had been misguided, but precisely because both ship and voyage had accomplished their purpose. During the new, dry-land stage of their journey, the travellers remain—and in this illustration must never forget that they remain—the people who made that voyage in that ship. (41)

Assuming accurate interpretation is possible, how does one manage to bring the authority of Scripture to bear upon the church let alone the world?

Read the Bible out loud together. To quote him directly:

“The whole of my argument so far leads to the following major conclusion: that the shorthand phrase ‘the authority of scripture’, when unpacked, offers a picture of God’s sovereign and saving plan for the entire cosmos, dramatically inaugurated by Jesus himself, and now to be implemented through the Spirit-led life of the church precisely as the scripture-reading community.” (83)

It feels perhaps a bit simple, but if we want to bring the authority of Scripture to bear on the church and the world we must read it together out loud. Wright laments how churches have cut out Scripture reading in worship gatherings in order to speed things up, or make things more palatable for seekers. Wright will have none of that. Read, read read he says. Read it in the liturgy, read it in large chunks together, have good preachers preach it regularly. He doesn’t dismiss the notion of personal private study, but that is not what he is driving at, for Wright the proclamation of the word is the heart of Church life and the only way it will ever be brought to bear upon the church and the world.

On the need for ongoing interpretive work

To affirm ‘the authority of scripture’ is precisely not to say, ‘We know what scripture means and don’t need to raise any more questions.’ It is always a way of saying that the church in each generation must make fresh and rejuvenated efforts to understand scripture more fully and live by it more thoroughly, even if that means cutting across cherished traditions. (67)

On the relationship between Scripture, reason and tradition:

Scripture is the shelf full of books; tradition is the memory of what people in the house have read and understood (or perhaps misunderstood) from that shelf; reason is the set of spectacles that people wear in order to make sense of what they read—though, worryingly, the spectacles have varied over time, and there are signs that some readers, using the ‘reason’ available to them, have severely distorted the texts they were reading. (74)