Is greed really that bad? 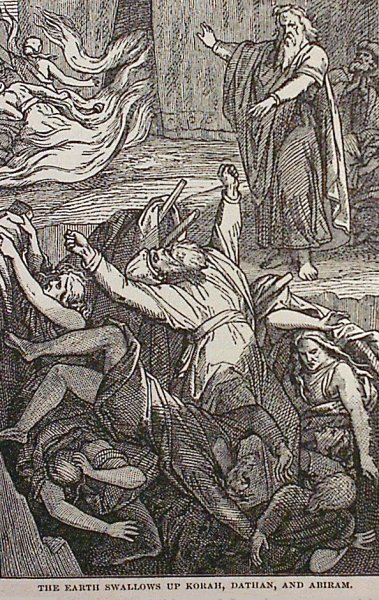 Korah is not content. Being a Levite is ok, but the real power, the real influence is with the priesthood. Who wants to be the assistant of the priest when you can be the priest, right?

But then there is Moses who made the rules. Only the offspring of Aaron qualify for the job. "that's a stupid rule!" thinks Korah. "The job selection process should be based on talent & ability not on progeny, this sucks! Who the hell does Moses think he is anyway, fricken dictator, making all these rules, he is no better than us, and what has he done for us anyway. He was supposed to bring us to the promised land, but here we are walking circles in the desert. Korah spreads his cancerous attitude, and it finds a hearing, the grumbling conitnues and grows. Now a chunk of people refuse to listen to Moses at all. It's a full on rebellion.

God has no interest in this.

The ground opens swallows several hundred of the rebels.

Then fire from heaven swoops down and snuffs out the life of Korah and 250 of his buddies who were trying to force their way into the priesthood.

You would think it was over at that point, but it wasn't the people at large feel as though Moses and Aaron are murderors. -- A lynch mob starts forming.

God has enough, the plague comes and before it's all over 14,700 have fallen.

Greed, coveteousness, unchecked ambition,  disrespect and self absorption lead to death everytime. Perhaps for us not in as dramatic a fashion but this truth remains.

The counterculteral message of Christ, leads us away from greed, coveteousness, unchecked ambition, disrespect, and self absorption.

Because I have been graced in Christ, I realize that everything I have is more than I deserve, that perspective gives birth to joy and gratitude which serve as great nutralizers to these dark attitudes.