How the West Won 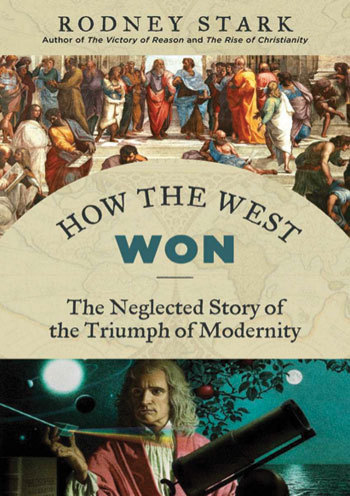 What you believe matters

For Rodney Stark the reason for the unprecedented success of Western civilization over others  comes down to belief. The west had a better system of beliefs that facilitated the development of freedom, reason, and dignity more than any other culture/society/religion hence the success.

Is Rodney on to something? I think so. Here is what I found.

It’s important to realize that by the time the African slave trade became popular in the West, it had already been going on with incredible brutality for centuries in East Africa through muslims and their predecessors. Human trade from Africa was old business and powerful African tribes were more than happy to continue the trade as new opportunities presented themselves in Western Africa.  Popes regularly condemned the practice of slavery, but their voice’s were largely blunted by ambitious businessmen and their rulers who stood to benefit from free labour.  In the end, it was Christian people who put an end to slavery, it was them getting back to their beliefs.

Belief in the value of hard work

Christianity celebrated hard work. In China the rich grew their fingernails as long as possible, and practiced foot-binding on their women all to display the belief that common labour was beneath a valuable persons station. Eastern monks, refused work, so they could meditate, leaving them entirely dependent upon others generosity for survival. Meanwhile Europes monks worked hard. They had this belief that working with their hands honoured God. Many of the early towns and cities in Europe grew up around the hustle and bustle of these early monasteries.

Belief that science was good for the glory of God

The west progressed because Christianity allowed for freedom and the pursuit of knowledge. Only Christianity taught that the earth was created by a personal rational God. Eastern religions did not believe in a personal rational God they just believed in an impersonal force — meditation was for the mysteries not science and discovery and Islam believed that the will of Allah made everything, and to question anything was blasphemy. Ancient Greece — thought ideas prevailed over observation (Idealism) and that what was observed was coming from the emotion & personality of nature — they believed that matter always was, not that anything created it.

Christians however,  were convinced that God had made things with order and design, hence to discover that order and design was a great way in which to glorify the God who created it. So Christian launched themselves wholeheartedly into natural science. Indeed, 51 out of 52 of the first notable scientists of the middle age era were devoted Christians — 16 of them were even members of the clergy.  Reason and free inquiry prevailed — thanks to Christianity. The great Irony is that today science is used as a means to escape God when originally it was the principal means used to discover him.

Belief in Free Will

“Free Will” was a game changing belief. Before Christianity and even in early Christianity people largely understood God in terms of “fate”. What will be, will be, accept it as the will of God. As belief in free will developed and grew in the west, people began to questions things and make choices for themselves. Caste systems of the east, and Islamic “will of Allah” mentalities made a “free will” approach to life impossible for those peoples.

The Dark is not so dark

Stark is sharply critical of the moniker “Dark Ages” for post Roman Empire Europe. He doesn’t believe in that at all. For Stark the Roman Empire with it’s command economy and it’s slave labour is the dark place. Both of those realities prevented innovation and invention.  Opposite to this the “blessing of disunity” that made up post empire Europe forced creativity and trade. Stark contests the notion that the Vikings and Normans were simple barbarians, rather they were impressive civilizations. Their inventions of the iron plow, superior blades, and unrivalled boats attest to this fact. The absence of trade in the so called dark ages doesn’t mean it wasn’t there. It shifted to river trade more then on the Mediterranean. Also tastes and needs changed. Home made butter surpassed olive oil as preferred for cooking, and furs became more desirable then silk.

The Evolution of Theology

For the first 600 years of Christianity the idea of charging someone interest for borrowing something was strongly frowned upon, it was just wrong — theologians started to change their tune around ideas of banking, making interest, earning money, market value, & prophet margins especially when the monks discovered that they were becoming very profitable — they led the way inventing money, appreciating hard labour, figuring out compensation, and all of the core principles that go into capitalism. It is a bit disconcerting, sometimes because it seems like truth about economics shifted with the times. Rodney is not afraid of pointing this out, to him Christianity is the religion of reason which allows for the freedom to think and adapt as situations change, No such freedom is allowed in Islam. Islam is not able to shift with changing times nearly as well because of their fixed position looking backward to the time of Muhammed which was the perfect time. It’s why they resisted the printing press for some 300 years after it’s development, since Muhammed didn’t use one, they didn't need to either, was the thinking. It’s why they refused to embrace fire arms until their armies were completely obsolete. These are just two examples of many. The Christian faith had a decidedly forward look.

What was the reformation all about anyway?

The protestant reformation happened primarily as an opportunity for nobility to seize power. In France and Spain there was already a good working relationship between the nobility and catholicism — essentially the nobles had lots of power so there was no need to dump the church. However in Germany, Netherlands, England & the Scandinavian countries there was mandatory tithes and power was held primarily with the church. Nobles used the reformation as an opportunity — it was a “pocketbook” reformation.

Luther himself lamented that after all their work no one attended church. If they did they were drunk, insolent, or fast asleep.

Stark believes the idea that muslims were advanced with science and technology until the west somehow swept by them is a myth. His version of history goes like this:  The Arabs conquered groups — the Persians, Nestorian Christians, & Jews, these subjugated cultures had advancements that Muslims co-opted, however, Islams “grudging toleration” of these cultures gradually turned into out right persecution of them (probably in part due to the crusades) — Essentially by the 1300’s the prevailing thought was all who live in the muslim world need to be muslim — As Muslim rule moved increasingly towards a zero toleration of others religions these cultural enclaves that were more open to such things as innovation and discovery were eradicated, in this so to disappeared these so called “Muslim advancements”

Black death destroyed European populations by as many as 50%. Creating a massive labour shortage. The mini Ice age and it’s attendant famines also destroyed massive populations groups. (the entire populations of Iceland for example) — This allowed the peasantry more freedom of choice in labour. Managers now had to make offers.  These great tragedies became the jump start for the necessary competitive market that must exist in free economies.

Stark is no fan of Rouseau theory, the romantic notion that non western cultures drifted along in peaceful serenity and joy until Western gunboats showed up and ruined everything is an absolute falsehood in Starks mind. Caribbean is a derivative of word cannibal. The Spanish conquered the Aztecs and the Inca’s because of superior weaponry and trickery, but also because of indigenous allies. The Aztec’s were brutal colonizers in their own right. They sacrificed to their gods thousands upon thousands of humans and ate them. The Spanish quickly found lesser tribes who were willing to help in their overthrow. Yes, the Spanish created a lot of problems but the human sacrifices stopped.

The ruining of indigenous culture by Western cultural imperialism?

The common belief is that when the West showed up they were controlled by greed and racism. As a result they emptied their colonies of wealth, and corrupted wonderful indigenous cultures. Stark doesn’t deny that happened. He gives the Belgian Congo as one example of such brutality.  However he is quick to point out that many of the missionaries and civil servants that went abroad were motivated by idealism and charity more than anything else. The development of countless schools, hospitals, orphanages, farms, clinics were all the result of western influences. To curse the imposition of the west upon the world one would have to be comfortable with the continued practices of foot binding, Sati (Women immolating themselves upon their husband funeral pyre) FGM, the stoning of rape victims, the killing of twins, the dismembering of people with Albinism, the continuation of slavery, forced castration, tyranny and a host of other culturally accepted practices that the west insisted upon stopping.

Fascinating book, gave me a hunger to keep reading. Feels a bit tilted, it’s a pro-west book for sure and I am not sure about all of his findings, but this book definitely provokes thought.