Doors of the Sea -- Book Review 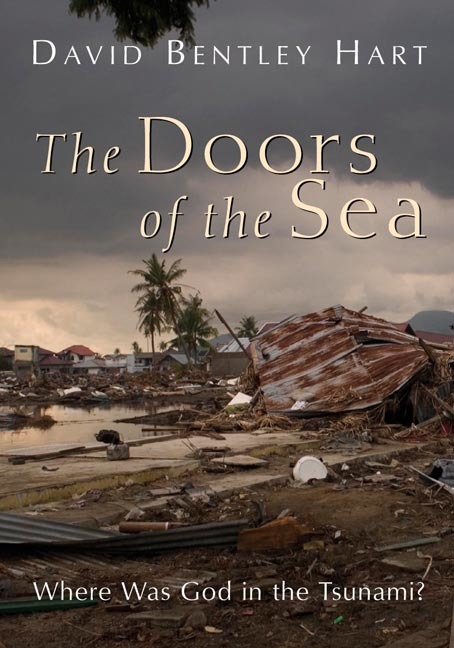 The Doors of the Sea -- David Bentley Hart.

Very gifted writer, first book I had to read in a while where I needed my dictionary constantly at the ready. He is a master in the way he uses words and constructs sentences.

A Tsunami happens, and then another wave of books hit to try to help us understand the horror of evil, pain, and suffering. Hart makes short work of Atheist commentary that disparages God in the wake of these sort of tragedies, then he moves into a debate on a Christians understanding of them.

Christians basically understand the relationship between God and evil in two ways.

Hart believes option #2 is wrong. He refers to it as total divine sovereignty and to him this belief is â€œa concept not shared by the authors of the New Testament.â€ (66).  For Hart it is utterly â€œfoolish to allow hope to degenerate into banal confidence in Godâ€™s great planâ€. (70) Hart is convinced that â€œhabitual optimismâ€ is a big problem for authentic faith. God must not have anything to do in a provisional or transitory way with evil/pain/suffering. For God to require evil to bring about his good ends would make him less than the God he is. (72)

Harts fervor to remove Godâ€™s fingerprints, even if theologically remote, from anything that would be considered â€œbadâ€ sends him spinning wildly towards a good vs evil dualism. He recognizes the gnostic nature of this, but is willing to flirt with it anyway. Hart is not quite ready to make that jump.  Early in his book he confesses â€œYes certainly, there is nothing, not even suffering or death, that cannot be providentially turned toward Godâ€™s good endsâ€....(35)

Hart glosses or ignores many of the passages of Scripture that lead others to conclude differently about Godâ€™s control over all things. (Job, Romans 9, Eph 1, Acts 2, Romans 5 Gen 50) His desire is that Christians embrace mystery when considering suffering and pain. â€œAs soon as one sheds the burden of the desire for total explanationâ€ is as soon as grace can do itâ€™s work. (68) He takes pains to distinguish between Godâ€™s will and Godâ€™s permission/providence. For example all the bad things we must endure are â€œNot desired by God but they are constrained by providence to serve his transcendent purposeâ€. He calls the doctrine of limited (definite) atonement a heresy and makes a short but violent attack on the battlements of reformed theology. After a few paragraphs he simply dismisses Calvin, lamenting that he didnâ€™t take â€œThe subtleties of high scholastic theology more seriouslyâ€. (94)

Hart concludes his book with the powerful statement â€œOur faith sets us free from optimism and teaches us instead to hope.  When we look into the face of a dead child we do not see the face of God but the face of Godâ€™s enemy. (103-104)

Harts efforts failed to dislodge me from believing option #2. I agree that evil is real, that Godâ€™s heart is saddened by our sorrow, that there is definitely incomprehensible mystery in all of this, but I continue to believe that Godâ€™s hand is at work in all things -- even pain and suffering and death. Hart criticizes optimism, but praises hope, this was confusing to me. As I see it both my hope and my optimism is in and comes from a good God who is in control.

When I look into the face of a dead child I see sorrow. I see what breaks Godâ€™s heart. I can even see Godâ€™s enemy. But I also see God. I see him carrying this little one through the veil of death, safely to her true home. God knew all along this would happen and God is good - not safe - but good.

The question on the front of the cover: â€œWhere was God in the Tsunami?â€ is never directly answered by Hart; however, from reading the book, the answer is unmistakable -- He wasnâ€™t.