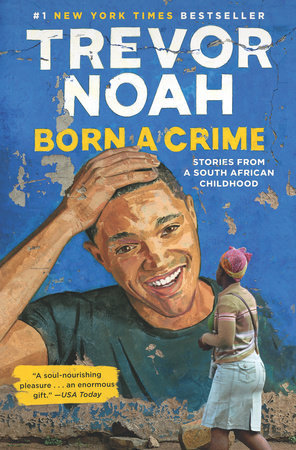 “Look on the bright side,” she said to her dear son Trevor. The bullet had entered at the base of her neck sliced through the bottom of her skull, ricocheted off the inside of her cheekbone and exited through her nose. “You are now the best looking member of our family.” Really? Humour at a time like this? Yes, it was her way. Humour, faith, hard work, and an independent, indomitable spirit characterized the life of this most remarkable woman. The book is a biography of Trever Noah famed comedian, but it’s evident from the very beginning that the book is a tribute to the real hero of the story, Trevor’s mother.

Pride kills — Every case of dysfunction and abuse recounted in this book has at its epicentre pride. Apartheid is the pride of race. Able, Trevor’s stepfather, refused to utilize the needed business help of Trevor's mom, because a customer commented that “his business was much better now that his wife was running the company” This comment hurt his pride. He would rather lose the company than credit his wife with success over himself. The African tribes all stereotyped each other and regularly and violently acted out against those negative stereotypes in self-righteous pride. It was precisely such an occasion that forced Trevor’s mom to shove him from a moving vehicle. The Mini Bus driver discovered her tribal heritage and concluded that she must be taught a lesson. Their only escape was to jump.

It’s ok to hit your woman — In Africa, it’s ok to beat your wife. It’s just how it is. Able beat up Trevors mom, many times and many times she marched off to the police station to bring a charge against her husband, each time the police refused to do so, saying that the two of them needed to work things out on their own. When he finally shot her after years of abuse, he was able to avoid prison time because he had no previous criminal record. Madness!

The confusing mess of poverty and crime — If you break a few rules to make some money or get some good food so that you don’t have to eat dog bone soup and Mopani worms every night how is that wrong? If rules just protect the interests of the wealthy while at the same time guaranteeing the poverty of the poor how are they good? They weren’t, so Trevor broke them. Regular beatings from a concerned mother at home, and fiery sermons at church meetings multiple times per week, did little to prevent him from lying, cheating, and stealing. “White people have insurance, so if we take their stuff they get paid, we are helping them and us, so it’s ok” is what he was told, and he believed it.

Weed over alcohol? — Before Abel met Trevor’s mom, he had a weed addiction. The addiction mellowed him out for the most part. After Trevor’s mom and he were married, she demanded that he give up weed for religious reasons. He complied with her request and stopped taking pot switching to the more culturally acceptable drug of alcohol instead. This switch turned him into the violent monster he became.

Defiant mission schools — When Apartheid took its stranglehold on the country of South Africa, one of its dirtiest tricks was the Bantu educational system. The government took over the education of blacks and instead of teaching them to read, write, and think they taught them how to cook and clean and farm. It was an educational sham intended to keep black people uneducated and thus easier to oppress. In the black areas, there were all sorts of mission schools that were doing what they could to educate black people properly, most were forced to shutter their doors, but a few struggled on in defiance of the government. One such school reached out to Trevor’s mom and educated her. It’s a good thing sometimes for Christians to defy governments.

Hitler wasn’t so bad — One of the craziest stories in the book is when Trevor took his DJ skills and his troupe of dancers to perform at a Jewish cultural centre. Trevor and his group had been having great success in the townships, and now they were getting gigs in white areas as well. At the centre, Trevor managed to whip up the crowd Jewish young people into a frenzy, at the right moment he brought out his best dancer. The troupe chanted “Go Hitler, Go Hitler, Go Hitler” in time with the pounding beat, to get their number one dancer into his grove. It never occurred to any of them, that the name Hitler might be offensive to their audience. The event was cut short, there was a fiery exchange full of misunderstanding, and they were sent packing. Turns out Hitler is not an uncommon name among Black people. Every black person needed a white name as well as a traditional name, people had heard about this Hitler person, who was so powerful, that white people even required black people to help defeat him. Knowing nothing of the history of Hitler, many blacks concluded that Hitler was a strong name, a mighty name, and thus a good name! Noah mentions several genocides that happened in Africa that no one really knows about. The Jewish genocide is recognized because the Germans kept records and because it happened in the middle of a high profile war. No one cared or kept records of what happened in the dark continent, even though atrocities were committed there on par with Hitler’s madness. Was Hitler the worst? From an African point of view, not even close.

Prayer as Bargaining — All of Trevor's family members wanted him to pray, Why? First, he was a child, God likes that. He also spoke English, God really loves that, from an African point of view, God came in English and so if you want to get something from God it is much better to ask it of him in his native tongue. Finally, Trevor was more white than all his relatives. God was clearly with the whites, look how rich they all were! Trevor was the best bargaining chip they had. How could God refuse an English speaking boy who looked white? So Trevor prayed at all the prayer meetings. Is that what prayer is? Trevor rejected this notion, and so do I.

Trevor doesn't really mock Christianity or Jesus too much. The crazy expectant faith that his mother had, he respects, it's just not for him. Deep down Trevor, I think, has seen too much pain and suffering to have a robust faith in a good God. However, I don't think he is quite ready to accept the alternative either.