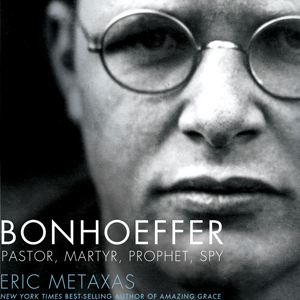 So complicated, yet so simple.  Surrounded by darkness yet so full of light.  So true yet so false.  So hopeless, yet so full of hope. This was the life of Deitrich Bonhoeffer. This biography should not be attempted by those interested in a mere gloss of his life. Eric Metaxes has been exceedingly thorough in his research. In this volume we learn not just the details of Bonhoeffers life, but his theology, his convictions, his wrestlings, and his doubts.

Also covered is the dark world of Nazi Germany, the conspiracy, the difficulties in Germany that led to the rise of Hitler. In addition we learn of the staggering capitulation of masses of German Christians away from faith in Jesus to faith in national socialism and Adolf Hitler.  The result of this surrender was the invention of the Reich church - a false church which believed essentially in a Christless Christianity, and whose jaw dropping anti semite teachings fell nicely in step with Hitler's final solution to the Jewish problem

Though Hitler is on record as saying he wished that his Germany had been of the muslim religion, or a pagan religion; according to him those religions would have been a lot more receptive to his principles of evil, hate, power, & domination. Christianitys foundations of grace, mercy, forgiveness, helping the weak and humility were utterly revolting to Hitler.

Ultimately it was Christians who resisted Hitler the most and became his biggest headache. Mataxes gives us a primary source look at the struggles, failings & persecutions of Bonhoeffers Confessing church, the horror of the extermination camps, and the ultimate ethical struggles that accompanied real Christians who loved their fatherland, but hated the Fuhrer.

This was such a tumultuous period in human history. Never before had good become so evil, and evil so good.  Many were swallowed up in the confusion and the lies. But not Bonhoeffer, his faith led him fearlessly forward.  He saw the will of God with such a clear eye in a time when nothing seemed clear. He knew his path and he spoke of it as one that would require, suffering, & death. He was submitted to it, he would do right regardless. He would not flee though he had plenty of opportunity. Instead he would stay in Germany. He would do what he could to resist and try to overthrow evil. He would bless those around him. He would care for his flock. He would live out the sermon on the mount.  He would do the will of God.

When his turn for the gallows came, just two weeks before Hitlers suicide and the end of the war, he turned to his fellow prisoners and said Death is not the end, its just the beginning. He mounted the steps, and met his beginning calmly and bravely.  He had finished his course. He had kept the faith. He was 39 years old.