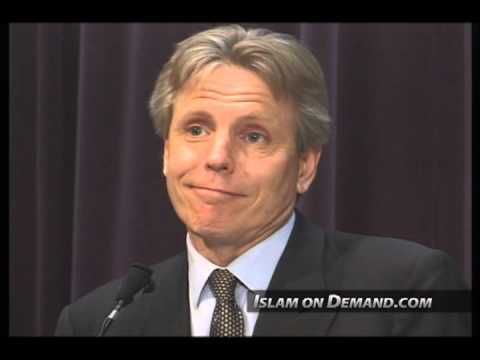 Jeffrey Lang grew up in an abusive home, his nominal Catholic faith provided him no solace for the suffering he endured. By his mid teen age years he had become a convinced atheist. In his 20’s a friend handed him a Quran, he started reading, over time he left atheism and embraced the way of Islam. Why?

According to Lang, Islam is better because unlike Christianity, human suffering is not a result of God’s angry judgement. In the beginning according to Lang’s interpretation of the Quran, there is no great sin that brought condemnation to the human race. There was only a little “slip up”. God didn’t get angry or feel threatened by this inconsequential eating of unauthorized fruit.

The big idea of the ancient Adam and Eve narrative is not one of divine judgment and human brokeness, rather divine mercy and human preparation. God does not punish Adam and Eve, rather he blesses them and tells them not to be afraid or sad. The “slip up” was part of their training. Now they must use their reason to choose God in the midst of suffering.

The choice between right and wrong is always a struggle (Jihad), but by using the facility of reason & intellect the right choices can be made and the relationship with God strengthened. Salvation comes through the work of the mind. Lang confesses that the greatest problem with unbelievers (non-muslims) is their inability to think properly  “Unbelief in Islam, is an infirmity of the mind” Lang says.

The point of Islam is to have a close relationship with God. Since God is transcendent how is that even possible? The Quran describes God as compassionate, merciful, forgiving, just, protective, wise, generous, truthful, and peaceful. All of these attributes are the seeds of God that reside in every human. When we love God by living out these attributes in the everyday God loves us back. These seeds of divinity grow into full flower as we yield to the will of God and this is how we find ourselves in close relationship with him.

Suffering is good because with out it, we could never learn to use our reason and make the right choices to live out the attributes of God. When we fail to water the seeds of divinity in us, we destroy ourselves, thus sin is simply self destruction. Hell then is not so much a punishment from God, as it is the ultimate self destruction

I’m happy for Lang, in that he certainly seems to have found the solace he was looking for. I think he misunderstands the Christian story and I am not entirely sure he’s got the Muslim story right either. But lets assume for the sake of this article he has the Islamic story correct. What are the big differences?

A curious observation: I agree with Lang about the need for the human to choose. Islam is the better story to him and he has chosen it, it makes the most sense to his mathematical mind. I respect that choice, even though I don’t agree with it.  I wish all Muslim’s would be so generous when it comes to the matter of religious choice. Let’s turn the story around a little bit. Is there any doubt as to what would have happened to Jeffrey Lang, if he had been born Mohammed Al Ghamdi in Saudi Arabia? Let’s imagine, for a moment, that someone gave him a Bible in his mid twenties and through secret study he decided that Christianity was the better story. In his enthusiasm for his new religion he begins to speak out in his home town of Medina that Jesus is his Saviour. I am certain we wouldn’t be listening to his speeches for long, we would be visiting his grave site instead. In our pluralistic world of today, something is wrong when a religion forces it’s adherence to believe on pain of death. I hope Lang’s message of free choice goes a long way in the house of Islam.