12 Rules for Life An Antidote for Chaos 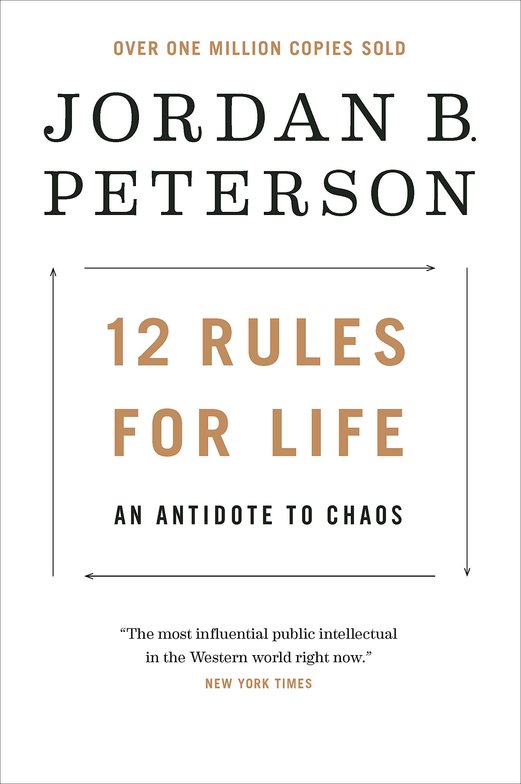 We have here in Peterson a man of great courage, intelligence and help for any humble enough to double check their pre-suppositions and listen well. Most of us want to be accepted culturally; we want our ideas to fit well with popular ideology. Peterson cares nothing about that. It’s no surprise that Babylon Bee, the Christian news satire organization granted him “honorary Christian status.”. He’s saying a lot of what Christian’s have been saying for years. Below are some of his most juicy counter-cultural bits.

False Axioms:
Humanity is good
We all naturally get along
People don't typically want to hurt each other.

The truest thing about any of us is our propensity toward evil. We hurt people with full knowledge that it will hurt them. Only the human has made an art form out of torture. The Nuremberg trials were the most significant event in the 20th century because the world agreed that evil is real. If evil is real then good must also be real. Clarity on good and evil is what creates the moral fabric of society. Christianity, for Peterson, is not true in any historical sense, but it's true when it comes to good and evil. The rejection of Christianity is why the 20th century played out the way it did. The bloodbath came as a direct result of the moral vacuum created by the dismissal of Christian thought.

How does the acknowledgement of our evil help anything? Instead of spending valuable energy trying to disguise it you can confess it, then use it as motivation to push hard toward’s the light. The realization that we have the capacity of a Nazi prison guard becomes a good thing in helping us all make sure we don’t.

Humanity needs Religion
The ancient religions tell true stories but not in any objective, historical, or scientific sense. The invaluable truth is in the moral drama played out in the stories. These stories give understanding to life which is something science can never do. It’s not difficult to see why some people get irritable and even violent when their belief systems are attacked. Belief is the greatest thing any human has in the assistance of living. Belief is the great antidote for chaos. Nihilism is the real enemy of humanity and faith keeps it at bay.

It is cruelty not to punish your kids
“Adultism” equates disciplining your child with other unacceptable perspectives like sexism and racism. Peterson gives no quarter to this idea. Reward and punishment consistently and carefully administered is the only way to raise children. “Two-year-olds are the most depraved humans on the planet,” says Peterson “they're violent and selfish, and they must be taught. It's cruel not to teach them.” Enforcing basic boundaries is an obvious necessity. He recommends limiting rules as much as possible and using the minimum force necessary to implement them, but kids must be taught.

Christians should be tougher
Peterson likes Christianity, that is obvious, but not Christianity that doesn’t stand up for itself. He says, “Christianity is not a call to victimize oneself in the service of others… Taking care of yourself doesn’t include being beat up!… It’s not virtuous to be victimized by a bully. Stand up straight with your shoulders back.” I resonated with this, but also wonder how this “don’t mess with me” perspective fits with Jesus’ admonition to take up our cross and follow him. It’s not always clear to me when it is Christian humility to defer to someone or if that is just weakness.

Using “the finished work of Christ” as an excuse for non-action was a terrible idea.
Nietzsche, Yung, and Marx were all extremely critical of Christianity because of the Christian emphasis on the finished work of Christ. This belief affected some prominent Christian people in such a way that they felt they were not responsible for working to make the world a better place. Redemption had already been accomplished in Christ, and so the status quo could remain. Communism came to be as a direct reaction to this apathy. Carl Yung said that the explosion of science as an effort to fix the wrongs of the world came about as a result of this same theologically based in-action. I wonder if this is one of the terrible unintended consequences of the Protestant Reformation? Catholics emphasized works but then used works as a hammer of oppression. The Protestants removed that hammer but then also, perhaps, the impetus to change the world.

Western culture brought about by white men is not as terrible as you’ve been led to believe
What has this “terrible western patriarchy” brought us? A comparatively uncorrupt political and economic system. Technology, wealth, increased lifespan, freedom, luxury and opportunity are all gifts from this “terrible oppressive system.” All cultures take with one hand and give something back with the other. Western culture has given more back than any other culture. To reduce our culture to simply an “oppressive system” is ungrateful, untrue and dangerous. Hierarchy exists everywhere. It’s not wrong or right, it just is. Culture creates winners and losers. Healthy cultures like Western culture have many levels and grades of success which can be noted and appreciated. We can all be winners without being equals.

The idea of a master plan where men simply tyrannized and controlled woman before the feminist revolution is false. Men invented feminine pads, tampons, and anesthetic to help women in childbirth and birth control. Did these men do so to oppress women or free them? (My wife astutely pointed out that perhaps they invented these things to benefit themselves. This possibility Peterson fails to suggest in his book.) Ultimately, Peterson’s big point is that freedom is Western culture’s overall goal, not oppression. The prevailing narrative that white men, in particular, are oppressors and destructive is not true. While abuse and exploitation have occurred, the dominant narrative arc of Western civilization has been a slow, and thoroughly imperfect, march towards freedom.

Marginalized men wreck society
Peterson makes a direct link between the softening of masculinity and the right-wing extremism of Donald Trump. When society forces men to be gentled and weak, when men are put down and villainized for their masculine behaviours they will always revolt in extreme directions, becoming either fascists or antisocial video-game-playing losers. Peterson laments that the universities are already emptying of men. Our society needs to celebrate and encourage masculine characteristics like competition, leadership, independence, risk and struggle. In the long run, this is better for women. Children of father-absent homes are four times as likely to be poor, twice as likely to commit suicide, and are at much higher risk of drug and alcohol abuse. Men no longer know where they belong in society and that spells trouble for everyone.

Inequality as the greatest evil is a lousy idea with terrible consequences.
The insane and insensible postmodern insistence that all gender differences are socially constructed comes from the false pre-supposition that all inequalities must be eliminated. Our society seems to want to believe that inequality is the greatest evil and hierarchy or distinction of any kind is wrong. For Peterson, these pre-suppositions must be rejected because they run right over the truth, prove themselves to be logically inconsistent and create havoc for our society.